This sign in front of the museum explains the history of the town.

These Delaware Indians arrowheads and artifacts are an important part of the town’s history.

During the time of the Ohio & Erie Canal, the tavern and inn in Newcomerstown, Ohio was a popular stop for canal boats. One of the oldest homes in town, built in 1841 by Andrew Creter, Temperance Tavern was made of black walnut and still contains many of the original features. 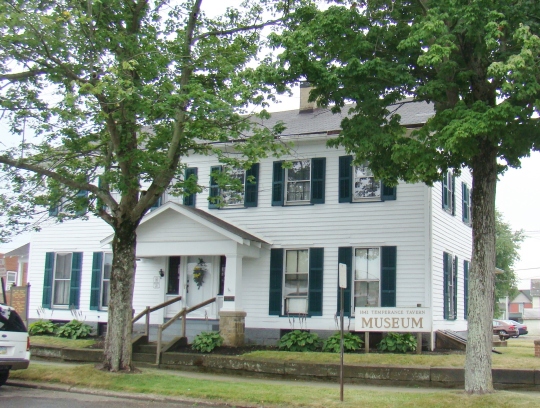 Temperance Tavern Museum, a beautiful old tavern and inn, is one of the oldest homes in Newcomerstown.

The home and tavern was conveniently built between the canal and the stagecoach trail. One home on Canal Street still has the original canal ditch in their front yard. The ditch was never filled in.

The Creter family lived on the first floor, while rooms on the second floor housed only women. Single men were literally locked in the attic to keep any embarrassing moments from happening with the lady guests. The basement contained Temperance Tavern. While the names don’t seem to fit together perfectly, no alcohol was served in this tavern.

Miss Elizabeth, wife of Andrew Creter, still visits the house in spirit. While her form is seldom seen, frequently doors move and cabinets open. She keeps watch over her house.

This stone fireplace provided a place to cook meals for visitors to the inn.

The kitchen has a large fireplace where all the tavern meals were cooked. The cast iron utensils hung over the fireplace for easy access in meal preparation. Meals were cooked and served here for people from the canal and stage, but it was also a local gathering place. The table served not only as a place for meals, but operations took place there as well.

Behind this cabinet was where slaves were hidden on the Underground Railroad.

This beautiful Moss Rose Tea Set came all the way from Virginia in 1820.

The dining room table displayed a beautiful Moss Rose Tea Set, which was brought to Newcomerstown from Virginia in 1820 by Mrs. John Snyder. The living room features military artifacts as well as a collection of dresses from the 1800-1900 time frame.

The wedding dress of Maude Scott highlights this display of clothing from 1800-1900.

A wedding dress from 1894 belonging to Maude Scott shows the style of the time. It also gives history of one of those early prominent women in the Tuscarawas County area. Maude Scott was the first woman in the county to be elected to public office and formed the first Republican Women’s Club there, a couple examples of her forward thinking.

Woody’s dad was superintendent of schools in Newcomerstown. After graduation from Newcomerstown High School, Woody coached football at Mingo Junction and New Philadelphia before moving on to Ohio State. 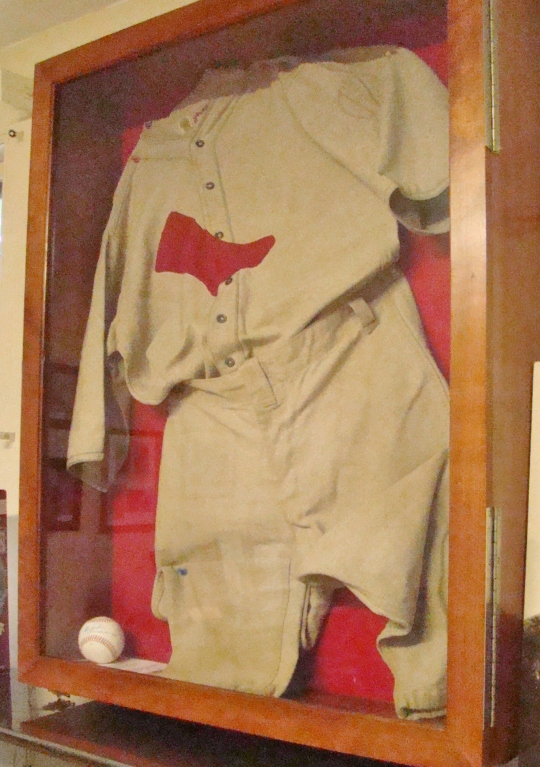 This 1908 Boston Red Sox uniform belonging to Cy Young is on display at the museum.

One special item in the museum is Cy Young’s complete 1908 Boston Red Sox uniform. The memorabilia span his life from baseball player to retiree, who enjoyed sitting on his front porch in a rocking chair, which is also in the museum today. From 1890-1911, Young won 511 games with an ERA if 2.63. No wonder he is a local hero.

Outside the museum stands a monument to Freeman Davis, a local Civil War hero.

Outside the Temperance Tavern Museum is a monument honoring Freeman Davis, a local man who earned the Congressional Medal of Honor during the Civil War. Davis served as a sergeant with Company B, 80th Ohio Volunteer Infantry during the war and his commendation came due to his bravery in the Battle of Missionary Ridge in Tennessee.

BJ McFadden has served as president of the Newcomerstown Historical Society for several years but recently stepped down from that post.

The museum is located at 221 West Canal Street in Newcomerstown, Ohio. Off I-77, take Exit 65 for US 36, Turn left on US 36 and then take the second exit, Ohio 258, to Newcomerstown to the left onto Pilling Street. After a short distance, turn right onto East Canal Street and about a mile down the street you’ll find the museum on the left.

Take a walk down Olde Main Street and view life as it used to be in the early 1940s. Twenty-three store fronts take you back to businesses that served their customers in that era.

Through the inspiration of Barb and Vane Scott II, the Olde Main Street Museum in Newcomerstown opened its doors in 2009 after four years of much hard work and dedication to the project.Since opening, a dressing room and parking lot have been added.

Shumaker’s Ford car dealership made its home here in 1915.

The Ford car dealership of Lell Shumaker was originally in this building back in 1915, followed by a factory making carbide tools. The carbide residue created an extensive cleaning problem when organizing the museum.

Today family members are still keeping up that tradition as Vane Scott III, and his granddaughter, Meredith, participate in the enactment of scenes. They both take great pride in carrying on this family inspired project. 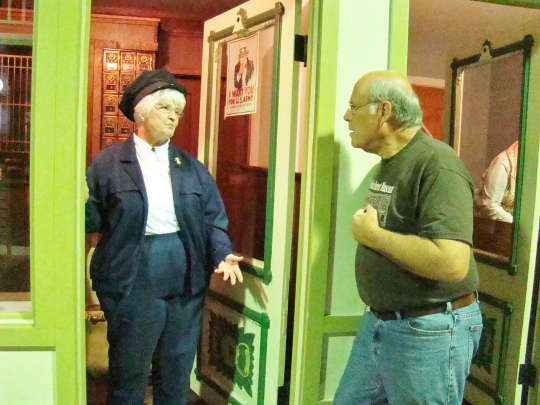 Ray McFadden talks to the postmaster regarding his late mail.

Ray and BJ McFadden have been instrumental in organizing this immense project.Their purpose was to restore an authentic village using only things that came from Newcomerstown.  They wanted to establish a Community Center where groups could be entertained and served a catered meal while enjoying the feeling of stepping back in time.

Now bus tour groups frequently take a break here to have lunch while hearing tales of a bygone era. Class reunions step back to the era of their high school days as shopkeepers dress in costumes according to the time period.  Visitors sitting on Main Street feel like they’re reliving their teenage years.

This prisoner was a bootlegger.

Many of the store fronts have shopkeepers who tell a little about their line of work. There was even a prisoner in jail, who had been arrested for making some home brew out in the woods. Main Street came alive with memories of the days of WWII as shopkeepers complained of there being little male help at their business.

Showcase Alley contains rotating collections of local people. Former area residents Cy Young and Woody Hayes each have their own showcase of memorabilia.

In 1948, there was great excitement in town as the whole town was invited to Cleveland Stadium where Cy Young was to be honored on his 80th birthday. Owner of the Indians, Bill Veeck, made it possible for the C&M Railroad to stop in Newcomerstown and carry the entire town to Cleveland at no cost to residents.

This detailed circus train collection is highlighted in Showcase Alley.

A miniature circus, purchased by Vane Scott II, was used as a traveling display by the Scott family. The fine details of this circus were first created in Germany, but Vane, the sign painter, touched them up to perfection.

It’s so pleasing to see a community cooperate on such a large project such as this with just volunteers. They take great pride in their museums and rightly so. Next door is a second historic stop, Temperance Tavern, which is packed with local history.

When scheduling a tour there or attending one of their many events, enjoy time in this living history museum. Meander down Main Street of long ago and smile as the memories appear.

Olde Main Street Museum is open Tuesday – Saturday from 10-4, and on Sunday from 1-4. If you would like to have your group visit for one of their many interesting programs, they will rearrange their schedule.