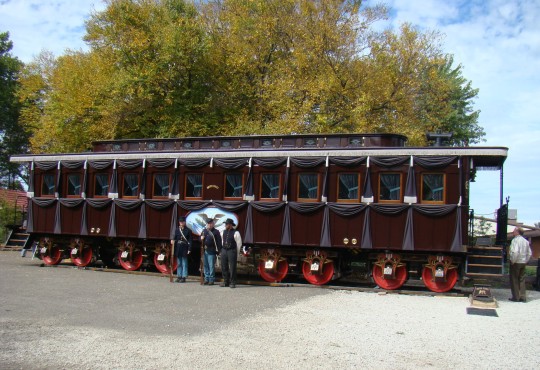 Now he belongs to the ages – or maybe to the angels.

At the time of Lincoln’s death,  these words are sometimes credited to Edwin Stanton, Lincoln’s Secretary of War, but whether they are his or not, the words connect Lincoln to his peers and also to those above them.

Warther Museum recently hosted one of the stops for the 2015 Lincoln Funeral Train. It traveled from Washington D.C. to Springfield, IL in honor of the 150th Anniversary of Lincoln’s death. Over 50,000 visitors toured the Lincoln Funeral Car on its journey.

Warther carved this ivory replica train when he was 80.

People have always been fascinated with Lincoln’s Funeral since 1865. Ernest Warther carved Lincoln’s funeral train out of ivory to celebrate the 100th Anniversary of his death. Therefore, they thought it would be fitting to have the replica of the original, stop by Warther Museum on its journey across America.

The ivory carving was finished in 1975 when Earnest Warther was 80 years old. A hippo’s ivory eye tooth was used because it is the very best grade of ivory. Warther commented, “Nothing but the best for Lincoln” as Lincoln was his hero. 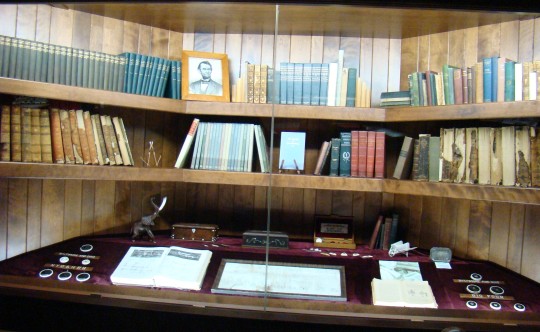 Warther admired Abraham Lincoln and had a vast collection relating to the president.

For the 150th Anniversary, outside the museum sat a wooden replica car, which they tried to keep as close as possible to the original.  The train car traveled as the trailer of a semi with highway wheels attached.

Dave Kloke of Kloke Locomotive Works in Elgin, IL and a staff of craftsmen were responsible for most of the work on this replica, which took four years to finish. Along the way he had a great deal of help from researchers in construction and history. One of those was a chemist and model train maker, Wayne Wesolowski of University of Arizona. All Wesolowski could find of the original train car was a pencil sized piece of wood. From this the chemist in him determined the original color and type of wood used. He wanted everything to match the original car.

This armored car was compared to Air Force One in regards to security and its design equaled the opulence of railroad cars used by European Royalty. This “Presidential Car” contained three rooms: parlor, stateroom, and sitting room.

The Lincoln coffin was 6’8″ long with handles made by the same company that made the original ones.

Upon entering the car, a 6’8″ casket appeared before your eyes. This long casket was made especially for Lincoln, a tall man for his time. The handles were made by the same company that made the original ones for Lincoln’s coffin. Chairs were for the soldiers to sit as they guarded the coffin during its entire journey. 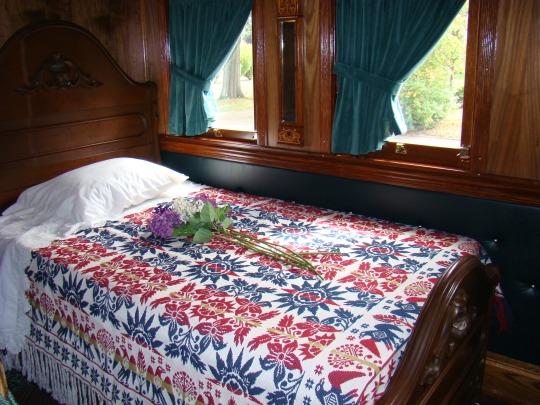 Lincoln felt this train too luxurious when the country suffered from the Civil War.

The presidential bedroom had never been used as President Lincoln felt this Presidential Car was too luxurious when many in the country were living in poverty. This funeral car, draped in black crepe, was one of nine cars in the funeral procession and was always the second to last in line. 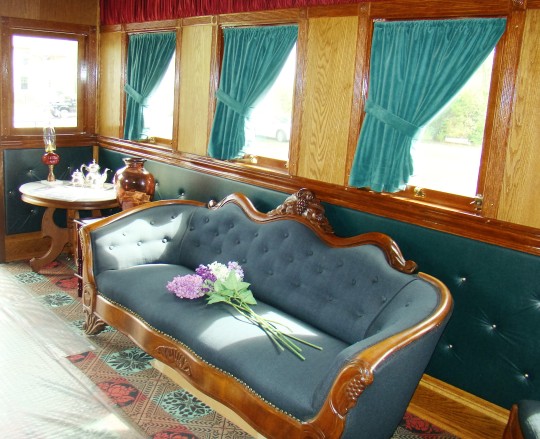 Young Willie’s coffin was carried at the place a sofa sets today.

Son Willy’s coffin was also on this train even though he had died three years previously. It was in the living room section where it replaced the couch. Lincoln’s wife did not go on this trip as she was too distraught.

Even the wheels of the train were patriotic.

This car was never used for anything else or by any other presidents. The following year, it sold for $6850 to Union Pacific Railroad, where it became an officers’ car while building the Transcontinental Railroad. After being displayed at the Worlds Fair in 1904, a grass fire destroyed the train car at Minneapolis in 1911.

One of the main purposes of this excursion was to help young people learn about history. Many local schools took advantage of this unique educational stop in Dover, Ohio to give their students a close look at an oft told story in United States history.

Lincoln would have been pleased as he felt education very important. When speaking to a university he remarked, “A capacity and taste for reading gives access to whatever has already been discovered by others. It is the key, or one of the keys, to the already solved problems. And not only so. It gives a relish and facility for successfully pursuing the yet unsolved ones.” 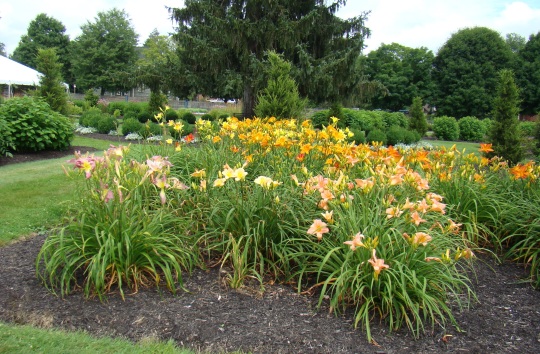 Summer time and the flowers are blooming! The beautiful garden at Zoar Village seems most spectacular during the month of July. An entire block of vegetable and flower beds will have you wanting to find a seat and enjoy the scenery, or casually stroll down the pathways.

Long ago this garden began as a place for the communal village to grow their vegetables as well as brighten their life with flowers. Who tended those early gardens at Zoar? School boys and elderly men received this assignment as the female occupants all had household chores that must be done daily, while the men were either working the fields or building the Ohio and Erie Canal. 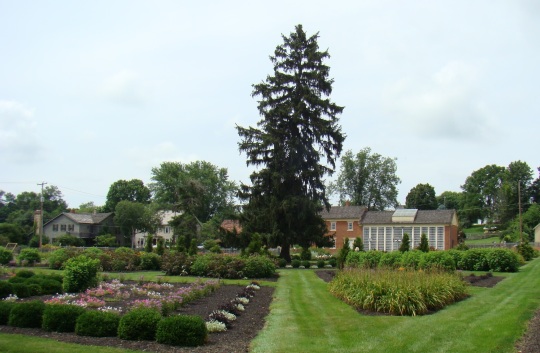 The center of the block garden has a special spiritual significance.

These in turn are circled by an arbor vitae hedge, indicating heaven. Paths in the garden are proclaimed as pathways to paradise showing that no matter what path you take, if you look to Christ, you will be led to heaven.These people had strong religious beliefs now that they were free to worship as they pleased in the United States.

The Gardener’s House had a conveniently attached greenhouse.

At the north end of the garden stands the Gardener’s House, which served as residence for gardener, Simon Beuter, and his family back in 1835. Shortly thereafter, a greenhouse, or hothouse, was added. Since they grew oranges, lemons and other fruit in the middle of winter in the greenhouse, it was also called the Orangerie. 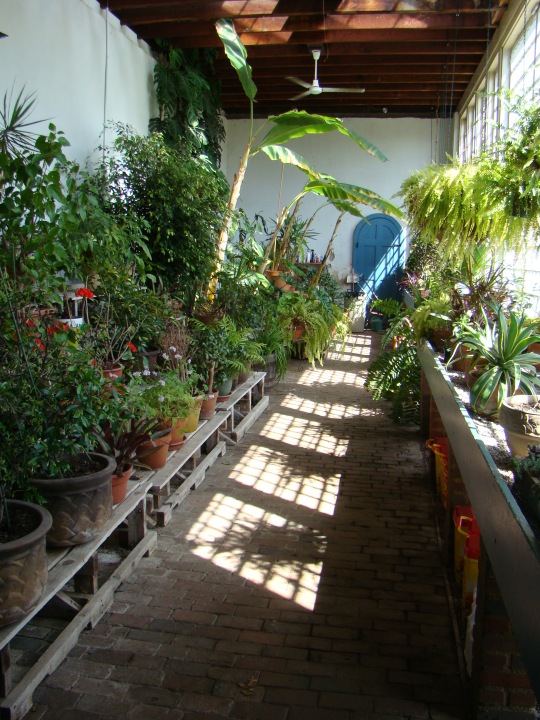 Tropical plants were stored in the greenhouse during the winter months.

Hothouses were unheard of in Ohio at this time. The tropical fruit trees were kept outside in large wooden tubs in the summer, but could easily be moved into the greenhouse during the cold winter months. After the Ohio and Erie Canal was built, wealthy Clevelanders would send their plants during winter to Zoar to be kept in the greenhouse, because of its unique underground heating system. 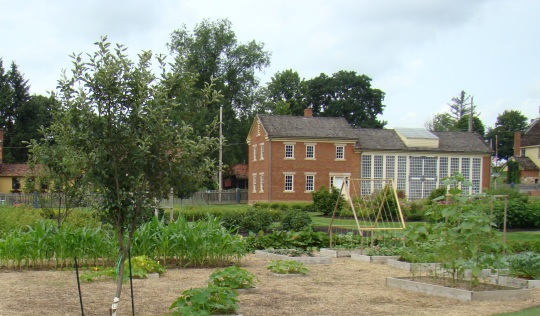 A vegetable garden would naturally have been part of the Zoarites’ Garden.

Research shows the Separatists frequently used many home remedies for ailments so grew medicinal types of herbs in their communal garden. They also grew fresh fruits and vegetables to provide strawberries and cabbages for the Zoar Hotel, where President William McKinley often dined on a Sunday afternoon. 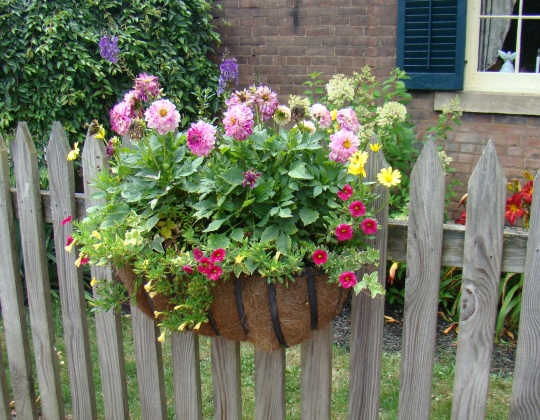 Charming flower boxes on local fences add to the beauty of the village.

Along the streets of town, many residents have beautiful flower gardens of their own. Baskets of flowers grace fences, and bushes bloom with beauty. There is much to see and do throughout the village with costumed guides telling about life there long ago.

While in the area take a stroll through Zoar Wetlands Arboretum or find the Trailhead nearby for the one-hundred mile long Towpath Trail of the old Ohio and Erie Canal.

Plan a visit to delightful Zoar Village on the banks of the Tuscarawas River where a guide remarked, “You could live your whole life here and never need cash. They believed cash was corrupting. It turns out they were right.”

Zoar Village can be reached just three miles off I-77 at Exit 93 between Dover and Canton, Ohio.

Ernest and Freida Warther were two hard working individuals, who loved their family above all else.  Their life and accomplishments can be seen in Dover, Ohio at the Warther Museum.  Ernest had only a second grade education but that never stopped him from being curious about how things were made.  Sometimes we think we just don’t have enough time, but Ernest made time by working from 2-7 every day before the family ever got up.

His fantastic creative abilities were inspired by a man who was making a pair of small pliers from a single block of wood.  This fascinated him and led him to make multiple pliers and designs from one block.

If you are going to carve, what is the thing you need the most?  A good knife!  Ernest, called Mooney by his friends, couldn’t find a knife that stayed sharp and had lots of strength. Thinking sometimes the best way to get something done right is to do it yourself, he developed a knife that would keep its sharp edge.  Those knives today are the finest kitchen knives you can find.  Furthermore, a knife was needed to be strong enough to carve ebony and ivory.  So Mooney developed quite a few different knives that can be seen and purchased at the museum.

His carvings of trains are something you have to see firsthand to understand their intricacy and detail.  Smithsonian Institute says this collection is a “priceless work of art.”  A favorite of young and old alike is the Funeral Train of Abraham Lincoln, which has fantastic details both inside and out. There are 64 ebony, walnut, and ivory train carvings on exhibit.  Remember that every piece is carved by hand.

Even a stop at the restroom is interesting as the walls of the Ladies room displayed many of Freida’s button designs. Had to ask what was on the walls of the Men’s restroom, and the answer was framed designs of Mooney’s arrowhead collection.  There is beauty everywhere.

Don’t forget to also check out Freida’s Buttons.  The lady of the house made beautiful designs out of 73,000 buttons that are displayed in the original workshop. Some are just for beauty but many have a story to tell.  All are quite lovely.

Outside the workshop is a lovely Swiss Style Garden.  This is a peaceful place to relax as there are plenty of benches for visitors.

Just this year, the Warthers’ original family home has been opened and is part of the guided tour.  You can just imagine the family with five children working and playing within its walls.  Many of Mooney’s early carvings are on display here also.

Before you leave, stop by the gift shop and purchase  one of the Warther Cutlery knives.  My little paring knife was purchased there nearly twenty years ago and is still like new.  Whenever you happen to be in the area, visit their knife shop where they will sharpen your Warther knife for life at no cost. When you stop by, they will ask you which hand you use to cut with so they can sharpen the blade accordingly.  They strive for perfection.

This is a great place to take family or friends as there is something to interest all ages.  Also their story is an inspiration to organize your time so you can create something special and still leave time for your family.