Small Town with a Big Heart

The Spirit of Christmas was alive and musical in downtown Cambridge, OH.  The occasion was The Cambridge City Band 2010 Holiday Concert at the Scottish Rite Auditorium.  This is an annual event in conjunction with the Christmas parade and the arrival of Santa Claus.

The band was in full force this Sunday afternoon dressed for the season.  Santa hats were plentiful as well as elves, lighted costumes, shirts and ties, as well as a beautiful holiday gown.

The backdrop caused comments  throughout the day and even later in the week.  It was a beautiful scene of a Victorian style village covered in snow and made the perfect setting for the Christmas music that was performed by the band. The question was: Who did that backdrop? or Where did they get it?

This small town still has old fashioned values and makes a person feel good at this season of the year.  The courthouse has a manger scene, which is easily accepted by all.  No complaints!  Well, last year some youngsters took Baby Jesus and moved his figure to a nearby place, but it was not done in a mean manner, and was recovered without damage. 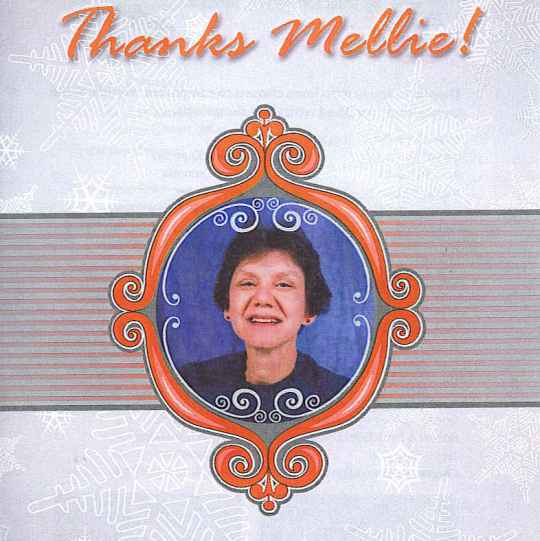 Today’s concert was in memory of Melanie Jones  Bolyard,  longtime band member and music enthusiast in the community. She left this world during the late summer after a long illness, and a video tribute was shown on the walls of the theater at intermission.  Many tears were shed as family and friends watched the touching life of Mellie relived before their eyes.

All the band concerts are opened with a prayer and followed by the Pledge of Allegiance. Yes, ‘under God’ is still included in the pledge.  During the day the audience also participated in singing some popular old Christmas songs and finished with singing old familiar Christmas carols, closing with “Silent Night”. The sing-a-long was led by Mellie’s Friends and Family.  Makes a heart feel good to know that this small town has kept traditions alive with no negative community feedback.

During the second half of the show an appearance was made by Maynard, the Loveable Lush pushed in a wheelchair by Santa Claus.  His bottle was quickly removed by the audio team as there is no drinking allowed in the theater!  Santa had a present, which he wanted a band member to open.  He called down one of the girls, who was dressed like an elf.  She was a bit leery of opening the present and approached cautiously.  These guys are always pulling jokes on each other. Well, this time it wasn’t a joke.

Maynard got down on one knee and with mike in hand, proposed to the young lady in the band.  That is a proposal she will long remember and she proudly showed her new ring to fellow band members.  She did have a difficult time playing her flute for the next song, as it truly did take her breath away.

The band played an outstanding selection of Christmas music with several specials.  “Santa Claus Comes to Dixieland” added some special liveliness to the afternoon.  There were special instrumental and vocal solos to give it lots of variety.

The show was excellent and closed with the traditional theme song of the band, “Thanks for the Memory”.  The Cambridge City Band has provided musical entertainment to the area for 169 years.   Cambridge should be proud of the fantastic musical ability that abounds in this area and gives so much enjoyment all year long.

Ernest and Freida Warther were two hard working individuals, who loved their family above all else.  Their life and accomplishments can be seen in Dover, Ohio at the Warther Museum.  Ernest had only a second grade education but that never stopped him from being curious about how things were made.  Sometimes we think we just don’t have enough time, but Ernest made time by working from 2-7 every day before the family ever got up.

His fantastic creative abilities were inspired by a man who was making a pair of small pliers from a single block of wood.  This fascinated him and led him to make multiple pliers and designs from one block.

If you are going to carve, what is the thing you need the most?  A good knife!  Ernest, called Mooney by his friends, couldn’t find a knife that stayed sharp and had lots of strength. Thinking sometimes the best way to get something done right is to do it yourself, he developed a knife that would keep its sharp edge.  Those knives today are the finest kitchen knives you can find.  Furthermore, a knife was needed to be strong enough to carve ebony and ivory.  So Mooney developed quite a few different knives that can be seen and purchased at the museum.

His carvings of trains are something you have to see firsthand to understand their intricacy and detail.  Smithsonian Institute says this collection is a “priceless work of art.”  A favorite of young and old alike is the Funeral Train of Abraham Lincoln, which has fantastic details both inside and out. There are 64 ebony, walnut, and ivory train carvings on exhibit.  Remember that every piece is carved by hand.

Even a stop at the restroom is interesting as the walls of the Ladies room displayed many of Freida’s button designs. Had to ask what was on the walls of the Men’s restroom, and the answer was framed designs of Mooney’s arrowhead collection.  There is beauty everywhere.

Don’t forget to also check out Freida’s Buttons.  The lady of the house made beautiful designs out of 73,000 buttons that are displayed in the original workshop. Some are just for beauty but many have a story to tell.  All are quite lovely.

Outside the workshop is a lovely Swiss Style Garden.  This is a peaceful place to relax as there are plenty of benches for visitors.

Just this year, the Warthers’ original family home has been opened and is part of the guided tour.  You can just imagine the family with five children working and playing within its walls.  Many of Mooney’s early carvings are on display here also.

Before you leave, stop by the gift shop and purchase  one of the Warther Cutlery knives.  My little paring knife was purchased there nearly twenty years ago and is still like new.  Whenever you happen to be in the area, visit their knife shop where they will sharpen your Warther knife for life at no cost. When you stop by, they will ask you which hand you use to cut with so they can sharpen the blade accordingly.  They strive for perfection.

This is a great place to take family or friends as there is something to interest all ages.  Also their story is an inspiration to organize your time so you can create something special and still leave time for your family.