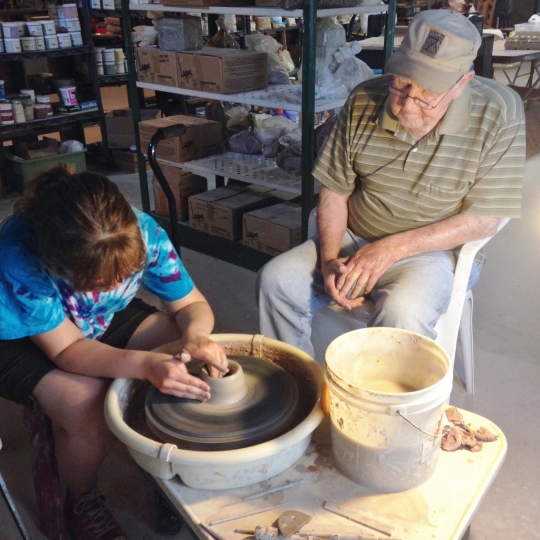 Walt instructs one of his students in the proper way to use a pottery wheel.

One of the areas where Walt Taylor excels is passing on his love for art. That’s why he enjoys sharing his knowledge with adults and especially young people, as they’re our future artists.

As a small child he lived on a farm in Lebanon, Ohio where  he attended a one-room school that was very typical of schools in those days: no running water, out door toilets, a pot bellied stove, and a paddle hanging on the wall behind the stove.

Walt had a story to tell about that paddle. A school bully pushed him around one day and Walt swung his lunch bucket, and hit the bully in the head knocking him to the ground. Both were taken inside and leaned over a desk for a paddling. First, the bully received a stern thrashing while Walt quaked. When it was Walt’s turn, the teacher swung the paddle one time so hard it hit the side of the desk and broke in two. No paddling for Walt that day. Doesn’t sound like an accident on the part of the teacher to me. 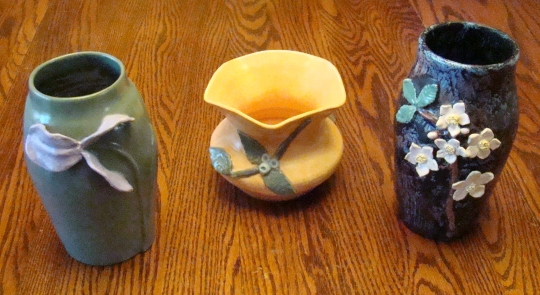 He enjoys creating one of a kind vases with floral applique.

The family moved often. His father said, “A rolling stone gathers no moss, but it gains a great polish.” At one time they lived near Fort Ancient and Walt followed his dad around the field when he was plowing, and found many arrowheads.

Woodcrafting has been a hobby since he was a young man. His building skills still go on today as he makes cabinets, chairs, and recently a communion stand for a local church that had just rebuilt. 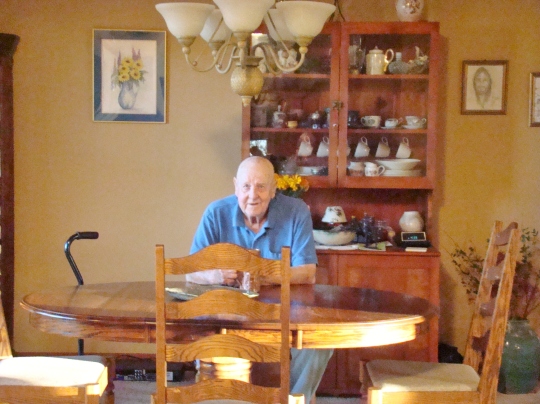 This talented man made these oak chairs and the cabinet behind them.

For the past few years, he has been making one new chair for their dining room each year. But he said he has been procrastinating about finishing the last two. He even joined the Procrastinators Anonymous, but they haven’t had a meeting yet.

He also enjoyed working on automobiles so developed mechanical skills as well.  That came in handy as he and his wife, Sheila, motorcycled all over the country. His favorite places to ride were in the mountains out west. It was in those mountains of Montana, where they saw the work of western potters, that an interest for making pottery began.

They also discovered many things on those back roads that you just can’t see from the interstate. He thought he noticed something that looked like Stonehenge on one such road, but it turned out to be Carhenge. Here cars were buried front first in the ground. Then there was the House on a Rock, a motel on an Indian reservation, and the list goes on. 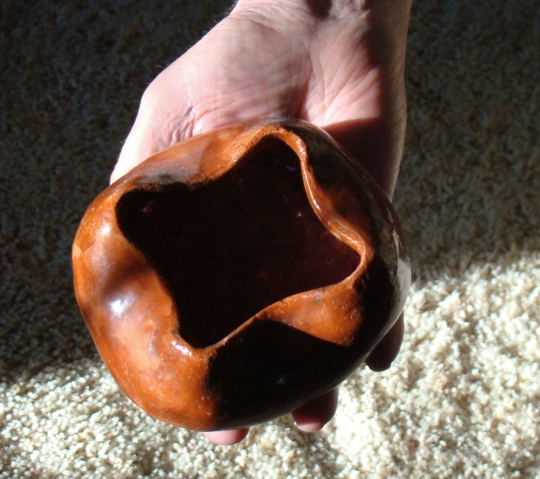 Walt holds the first piece of pottery he ever made…out of kitty litter.

It wasn’t until 1992 that Walt tried his hand at pottery. At Octoberfest, he purchased his first kiln and making pottery has become his passion ever since. The first bowl he made was out of ‘unused’ kitty litter! He learned that kitty litter had a clay base and when mixed with a little bit of water could be worked into shape. That bowl still sets on his bedroom stand today. 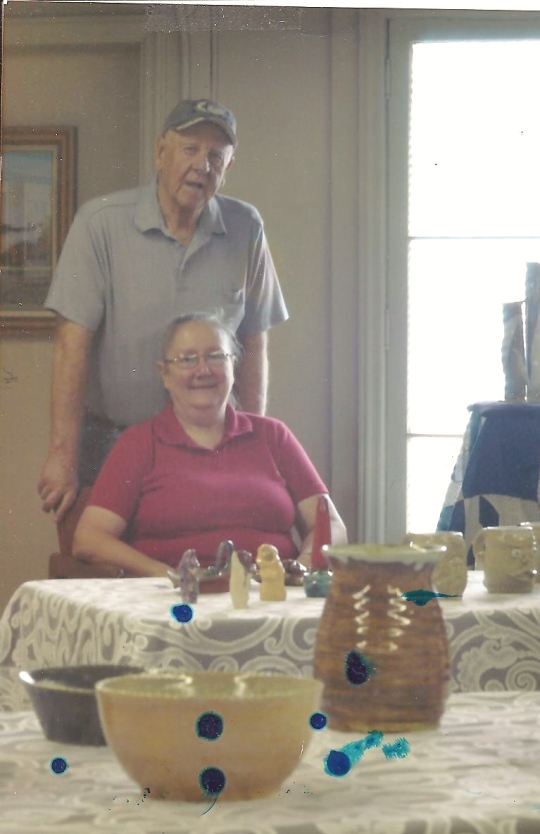 Walt and Sheila  have attended many festivals in the area to display and sell their creations.

To begin with, he made pottery items just because he enjoyed doing it. Then he began giving them to his friends, who told him that he should be selling them. That began a business they ran until last year, Taymoor Pottery…a combination of his last name and his wife, Sheila’s maiden name. 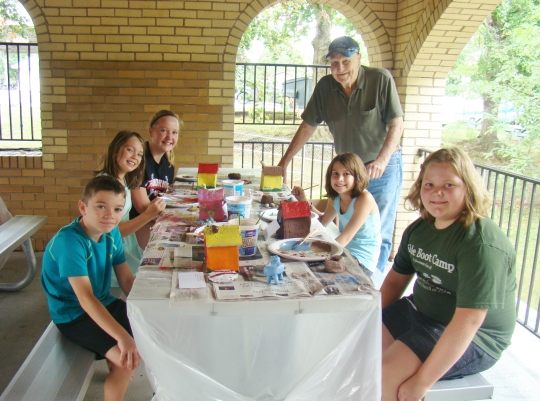 Walt has a smile on his face while working with youngsters at Art in the Park during the Salt Fork Festival.

Walt and Sheila, hope to teach youngsters to enjoy art as much as they do. They’ve helped teach children’s art classes at the Salt Fork Festival for several years. Wherever Walt is making pottery, children can usually be found watching. Talking about children always brings a smile to his face as ,“They are fun to work with. If you treat them as equals, they accept you as you are.” 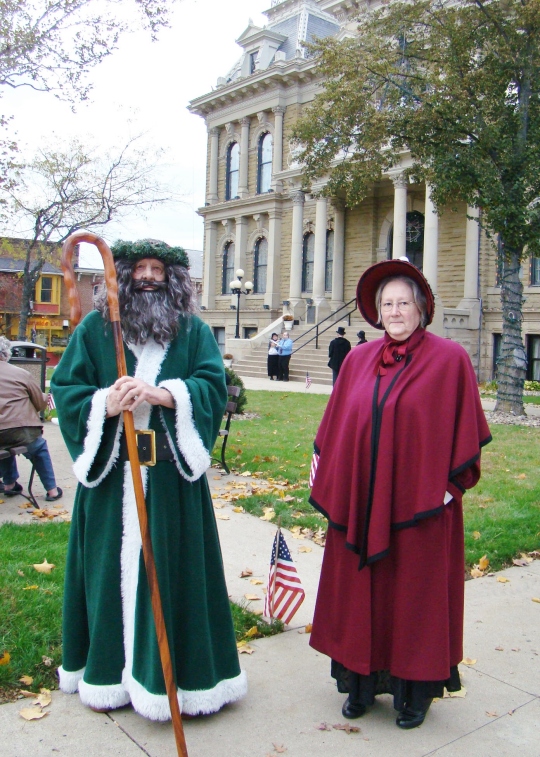 Walt greeted visitors as Father Christmas for ten years, with help from Sheila.

For the last ten years, Walt has portrayed Father Christmas for Dickens Victorian Village. He would meet buses on the street or in the Welcome Center and probably has his picture in many family albums as a result. He’s not sure if he’ll be able to do that this year at the age of 91.

Even though the business is closed, they still enjoy making pottery. Now they make just what they like. Right now Raku, a Japanese style is a favorite. It was first used by the Japanese Emperor and was known as a ‘throw away pottery’. The emperor would drink his tea, then throw the cup against the wall. 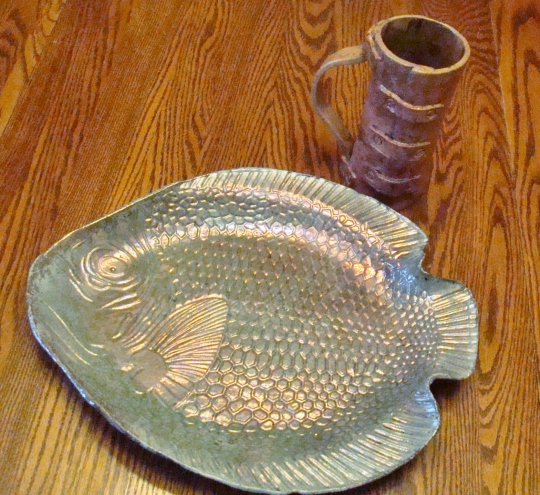 His current favorite project centers around Raku, a Japanese form of art.

Raku is a ‘quick fire, quick cool’ kind of pottery so it would be fired and ready for supper quickly. Today in the United States a glaze is added and it’s no long a throw away. Actually it’s so attractive you wouldn’t want to throw it away. 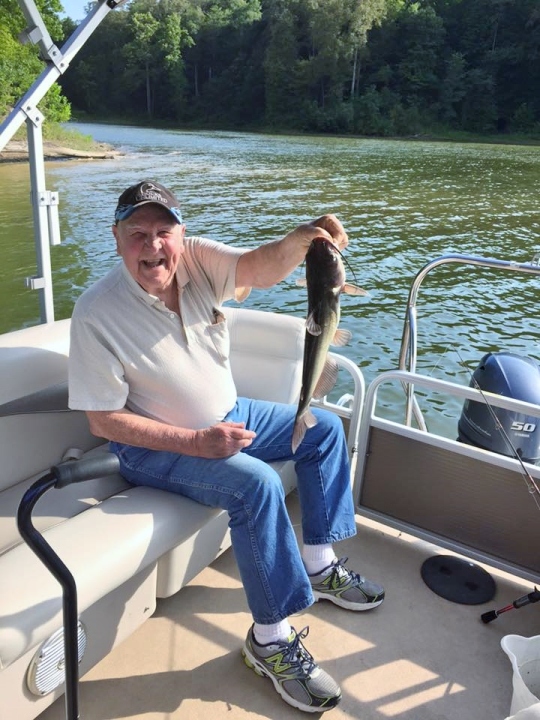 Walt still enjoys a day on the lake with his fishing pole.

Walt is just ‘a good old boy’, who has taken an interest in the community in many different ways. Thoughts of travel still skip through his mind and he often dreams of living in Hawaii or Tahiti…or at least visiting. Our world could use more of those ‘good old boys’. 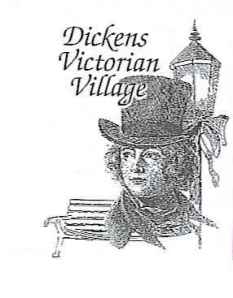 Catch the Spirit of Christmas! Step back in time and visit the Dickens Victorian Village in downtown Cambridge, Ohio from November thru January 8, 2012. As you walk the streets, you will be greeted by volunteers in Victorian dress, sometimes entertained by strolling musicians, and on the weekends can see the lighted carriages giving visitors a relaxing ride.  It is a friendly town where you feel welcome and hear ” Merry Christmas” quite often.

Nearly two hundred life sized mannequins can be found either on the main street, Wheeling Avenue, or in close by businesses and towns. Let’s meet a few of the mannequins, so you can hear their stories of how they came to be part of the Dickens experience. 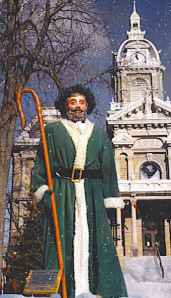 “Father Christmas” was one of the first characters assembled back in 2005 when local businessman, Bob Ley and his wife Sue were inspired on a trip to Oglebay Park to bring visitors to their town for a winter vacation.  Bob and Sue discussed several ideas but the decision was finally made when Sue suggested an English Christmas theme would be a good choice. Since they lived in Cambridge with Victorian architecture, street lamps, and even benches along the street, English roots ran deep. Thus blossomed the idea of using a theme developed from Charles Dickens’ Christmas Carol. Today Father Christmas stands on the courthouse square greeting cars and buses from three directions. In his bright green cloak of Victorian times, Father Christmas typifies the spirit of good cheer at Christmastime… and you will definitely find lots of good cheer at Dickens Victorian Village. 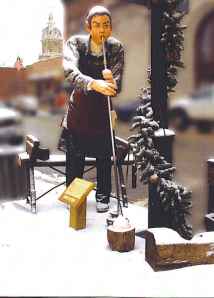 “Glass Blower at Work” symbolizes the rich heritage in the Cambridge area of artisans who produced quality hand made glass and is a special favorite since my father was a glass blower at Cambridge Glass Co. This was a major employer in the area from 1902-1958 and their glassware is a collector’s item today. A frequent bus stop during tours of the city includes the National Museum of Cambridge Glass where you can still see samples of the beautiful etchings and unique designs, which made these glass creations very fashionable to use for a special occasion. Today descendants of former Cambridge Glass workers still have a few small shops in the area. Boyd Crystal Art Glass, Mosser Glass, and Variety Glass all continue to produce handmade pieces today. 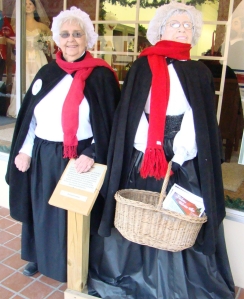 Ye Olde Curiosity Shoppe is headquarters of Dickens Welcome Center and here you are greeted by “The Shopkeeper,” and quite often beside her you will find the lady who it was created to resemble after she won the first Picture Your Face Raffle. Visitors sometimes say, “Is she real, or is she a mannequin?” Raffle tickets are sold each year and the winners become mannequins in the future.   The Welcome Center’s Imagination Station provides an opportunity for visitors to try on Victorian wear. Then they can have their pictures taken with the beautiful Christmas tree, Charles Dickens, or the new addition this year of the Duke and Duchess of Cambridge mannequins, which resemble Prince William and Kate. This is fun for young and old alike. Here you will also find many unusual Christmas gifts and ideas. 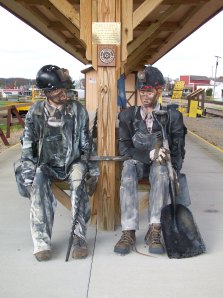 Not all of the mannequins are downtown. In neighboring Byesville, the “Coal Miners” can be found under the station roof of the Byesville Scenic Railway. This is another popular destination with its “Spirit of Christmas” train, which follows a trail over abandoned mines. While on board, men dressed as miners tell stories of days when coal mining was king in this area.  To remember all those who worked in the mines, a statue, “Coal Miners Memorial”, is in the planning stages and will be the only statue to honor coal miners in the state of Ohio. The mines are out of sight, the tipples gone, but the miners are still in the minds and hearts of families and friends. 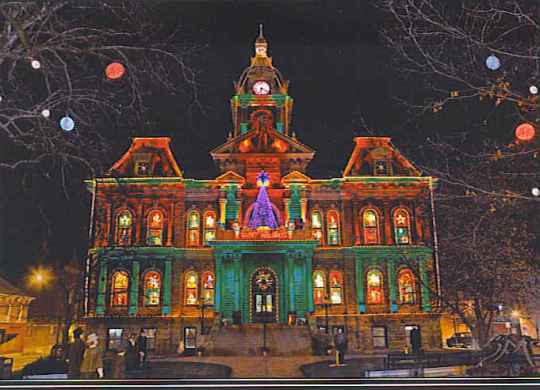 When evening falls, everyone heads to the Cambridge Courthouse for a spectacular light show. Christmas music and the movement of the lights on the courthouse are synchronized perfectly and enjoyed by all. The display is computer controlled with 60,000 lights and 364 electrical circuits. Four different light shows entertain the packed courthouse square with traditional Christmas songs as well as children’s and contemporary. Add a little snow and it’s a perfect evening!

Introductions have been made to a few mannequins just to get your curiosity aroused, but you need to tour the area to see which one might be your favorite. Dickens Victorian Village welcomes individuals and tour buses to experience the special feeling of Christmas that lives in downtown Cambridge, Ohio.

As one recent visitor remarked, “If you don’t have the Spirit of Christmas when you come here, you certainly should have it when you leave.”

Dickens Victorian Village is located in downtown Cambridge, Ohio, which is just northwest of the intersection of I-70 and I-77. Come spend the day or stay the night, and catch the Spirit of Christmas.