American History Shall March Along That Skyline

Six Grandfathers Mountain, now known as Mount Rushmore, was spiritual home to the Lakota Sioux Indians. Many of the Sioux were insulted by the building of the Memorial on their sacred land. Add to that the fact that the monument celebrates the Europeans, who killed so many of their tribesmen as well as appropriating their land, and it is no wonder there is still controversy between the Sioux and the US government today.

As far back at 1923, the people of the Black Hills region of South Dakota were searching for an idea to bring tourists to their part of the country. After seeing samples of carvings done by Gutzon Borglum, he was invited by historian Doane Robinson, The Father of Mount Rushmore, to the Black Hills so they could find an acceptable place for a large carving.  After dismissing the idea of using the Needles range, they settled on the granite faced Mount Rushmore near Keystone, South Dakota. The granite was relatively free of fractures, and it also faced southeast for more sun exposure. When the selection was made, sixty year old Borglum remarked, “American history shall march along that skyline.” 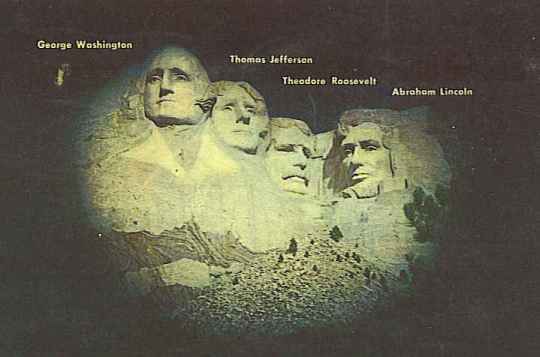 For one hour each evening, Mount Rushmore, The Presidents’ Mountain, is illuminated with steadily increasing lights that make this carving glow in brilliant splendor. The four presidential faces shown on this 1989 postcard are from left to right: George Washington, the father of our country; Thomas Jefferson, principal author of the Constitution, and instrumental in the Louisiana Purchase; Theodore Roosevelt, champion of conservation; and Abraham Lincoln, leader during the Civil War.

Today we can see the results of Gutzon Borglum’s  guidance of approximately four hundred workers, including his son,  from 1927-1941.  The four sixty foot likenesses of the faces rest on 1,278 acres. Original plans were to sculpt them down to the waists, but that idea was cancelled due to insufficient funds. Upon his death, Gutzon’s son, Lincoln Borglum, was in charge of completing the project, but he basically left it as the monument appeared upon his father’s death.

Today you can visit the Lincoln Borglum Museum where a film provides an introduction to the memorial site plus historic exhibits.  Take a lunch break at Carvers’  Cafe where you might find on the menu tasty dishes such as Jeffersonian Gourmet Salad or Teddy’s Bison Chili. If you are lucky, you can sit at a table by the large wall of windows, which provides a great view of Mount Rushmore. The Sculptor’s Studio displays the unique plaster models used prior to sculpting on the mountain side, as well as the tools used while carving. A recent addition is the Native American Heritage Village devoted to Indian culture and the Indians’ place in local history. 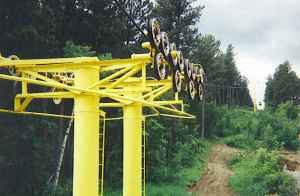 For another close-up view of the mountain, take the scenic chairlift ride through the Ponderosa pines. Views are spectacular and there is a park at the summit as well as a small outdoor grille.  You must be careful getting on and off as the chairlift stops for no one.  You do get a unique view of the presidential faces as well as enjoying the feeling of flying up the mountainside on the chairlift. Coming down you can either return on the chairlift or descend on the Alpine Slide.  This 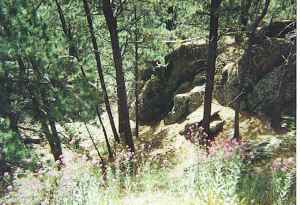 new slide is 2000 feet long and you are able to control the speed downhill on a wheeled sled with brakes. So it is up to you!  Either take a slow and leisurely ride down, or get a rush of excitement.

On the side of the mountain behind the faces is an interesting tunnel called the Hall of Records. In 1998, they began construction of a vault there that would hold sixteen porcelain enamel panels.  On these panels are: text of The Declaration of Independence, Constitution, biographies of the four presidents, and a short history of the United States.  All this is being done to preserve our present history for future generations. At this time, the Hall of Records is not accessible to the public. 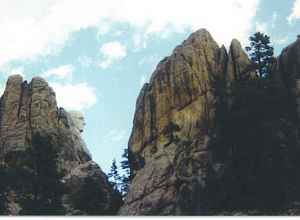 Here at Mount Rushmore, you and your family can have a great educational experience by learning about the Indian heritage as well as the significance of the four faces carved there. Leaving the park, there was an interesting view from the back road where it appeared that George Washington was keeping watch on everything with eyes eleven feet across. The pupils of each eye are made of granite so they appear to twinkle when the sun hits them.  Maybe that is the reason the eyes seem to follow you!  Join the nearly three million people who visit here each year to see the faces march along the skyline.

Mount Rushmore Memorial in western South Dakota can easily be reached off I-90 off Exit 57 to Highway 16, which goes to Keystone. At Keystone take Highway 244 to the Mount Rushmore entrance.