Caution Ghost Crossing! could easily be a sign encountered quite often by members of the Southeastern Ohio Paranormal Investigators.   And on a Saturday in February, ghost hunting appeared to be a very popular subject as the auditorium at the John McIntire Library in Zanesville, Ohio was packed with adults seeking to learn more about ghosts. While the curious were gathering, videos of ghost hunts were being shown to whet the appetite. Members of the S.E.O.P.I. were on hand to give information about the technical aspect of ghost hunting, historic research involved, as well as psychic and metaphysical connections. 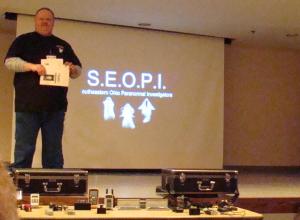 Started four years ago, the S.E.O.P.I. has become a popular source for people who feel they have a ghost on  their property, and even for those wanting help getting their ghosts to move on. Tom Robson, lead investigator, said that while they continue to explore all possibilities, “There can’t be an expert in a field with no scientific evidence.” As a youngster, Tom had an experience with the paranormal as well as a deep interest in history. Now he has discovered how  the two seem to be closely connected. What started out to be just a part time hobby for him has nearly turned into a full time job.

The evidence that has been captured is 90% on audio and only 10% on video. There was a nice display of the instruments used to capture the sounds and pictures at the various haunted establishments. Some of their favorite instruments included: the Olympus digital audio recorder, Zoom H1 microphone, and Zoom H2, which was so powerful they said you could hear raindrops three rooms away.

For example, during an Electronic Voice Phenomena (EVP) session on the Triangular Field in Gettysburg, questions were asked of a spirit and there were many responses recorded that were easily understood.  Responses were short such as : “Right”, “OK”, or  “I know”. When leaving the field, the team said, “Blessings to all,” to which a voice answered, “Thank you.” The recording equipment produces some very interesting results.

Historian, Gary Felumlee, presented paranormal research tips, because knowing the time period you are dealing with could be vital for a successful communication. His goal is eventually to show by scientific means that the unusual activity is from the spirit world. Gary recently wrote about one of these historic paranormal experiences in a book entitled Public Spirits Of The Old Putnam District Of Zanesville Ohio.

An interesting observation that Gary pointed out was the fact that you need to introduce yourself to the ghost. That will make them more comfortable and more likely to stay in the vicinity and if you are lucky even answer your questions. So he suggested that you say something like, “My name is ***** and I’m here to learn about you.”

The metaphysical side of investigations was also covered with April Lovejoy explaining the world of crystals and meditation. Often team members wear particular crystals as protective devices from the spirits.  She actually had the entire audience practice five minutes of meditation to learn to focus their mind in one place.  This helps, too, when on a paranormal investigation as it permits the team a close connection to the place they are visiting.

Well know psychic, Ellen Bone, described an actual investigation where through psychic connection they were able to find the location of the spirit and release it from the residence. Ellen’s natural intuitive qualities were always encouraged by her family where psychic activities were accepted as part of the norm. She believes we are all connected, and does her work with honesty and kindness.

Evidence was shared through recordings, photos, and videos. It was surprising how many establishments in the area have had some paranormal activity. They presented information on several places where the S.E.O.P.I. team had been welcomed to investigate. These included many places right here in Ohio: Penny Court, Col. Taylor Bed & Breakfast, and Cambridge Performing Arts Centre in Cambridge; Zak’s Restaurant, Papa Chuck’s Pizza, Zanesville Community Theater, Stone Academy, and Schultz Mansion in Zanesville; Licking County Jail in Newark; and The Captain’s House in Dresden, just to name a few.

Door prizes, including gift certificates, tee shirts, books, and pictures were given out throughout the program. To make the prizes extra special, all were donated by businesses where paranormal activity has been a frequent occurrence.

What do you think? Have you encountered any ghostly experiences in your world? Time to decide: Believer or Skeptic!

Southeastern Ohio Paranormal Investigators are a select group of researchers from many walks of life. The group is based in Zanesville, Ohio and assists residents and businesses that encounter suspected paranormal activities.

Enjoy Your Life!  That was the theme of Gampo Abbey, a small Buddhist Monastery situated along the Cabot Trail on Cape Breton Island in Nova Scotia, Canada. This was certainly a place where it was easy to enjoy the beauties of nature as well as the peaceful environment on the Northern tip of this island.

Fiddle Farm Bed & Breakfast became the starting point for this adventure. While visiting the other boarders in the evening, Arlin, a young geologist, discussed his plans to go to the Abbey in the morning for a one month stay. Here he would relax and develop an openness of mind and heart by plunging himself into a time of meditation. He was to call the Abbey for pick up, but there was a problem that day so this gypsy volunteered to drive him to the Abbey – but then, only with the Abbey’s approval. 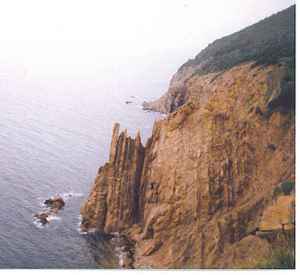 Having been here before, Arlin was a great travel guide.  With his background in geology, he pointed out and explained the rock formations along the way. One of the breathtaking spots very near the monastery was Cathedral Rock.  This was viewed off a three hundred foot drop into the vast Gulf of St Lawrence. Have to be careful not to get too close to the edge!

Then came the beautiful white Gampo Abbey trimmed with red. Arrived just in time for lunch, which today was salmon – their one meal of the week where 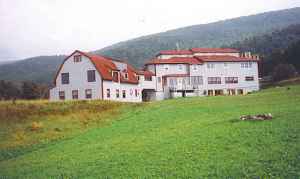 meat or fish was served.  The beautiful salad really caught my eye as it was made from the various plants in the yard and garden of the Abbey, and even had flowers mixed in for beauty. Turned out the flowers were also quite tasty. They did explain that they studied the plants in the area so they knew which plants were safe to eat and which were poisonous. Lucky not to have any poisonous plants that day!

Seating for the meal was at long plain tables with benches. Everyone served themselves and when finished, washed their own dishes. Arlin volunteered to serve me that day, but personally felt it would be an interesting part of the experience to follow their example.  While washing my dishes, also got to talk to others on the retreat and felt very welcome.

Then toured the shrine rooms elaborately decorated with Buddhas and pictures of leaders of their Tibetian section.  This was where they meditated nine to ten hours a day while sitting on rugs on the floor.  The aim was to make their mind blank and then allow that space to be filled with the beauty and blessings existing in their present world.  Silence was an important part of their training.

principles: avoid killing, stealing,  lying, sexual activity and intoxicants. Everyone must participate in the daily schedule and observe silence. Heads were shaved on men and women alike, and both wore the garb of monastic life. No outdoor shoes are allowed inside the Abbey, just slippers.

Gampo Abbey is a very powerful place to become a loving, caring person interested in helping others. Relax your mind and listen to the world around you so you can enjoy the moment.  One important question they pose is: What is the best use of each day of our lives? That would be a great question for us to ask ourselves every morning.  Enjoy your life!

Gentle breeze blows across  Salt Fork Lake causing rippling waves to lap the shore.  The deep blue of the lake reflects the clouds and trees as their leaves appear in the most gorgeous shade of spring green.

This is the perfect place for meditation. Peace seems to reign as the world comes alive with Spring in all its glory.  Time to think about the future, relive pleasant memories of the past, and enjoy the moment. There is a feeling of freedom as the worries of everyday life seem to lift away and are replaced by calm within.

Others have the same idea as a picnic table at the edge provides a good photo setting for a young family as they too enjoy the beauties of Mother Nature.

Along the bank, a father and his young son are enjoying some quality time fishing together quietly.  The bond they build will last for a lifetime.

Water calms the spirit so this is a great place to relax all through the year.  When you need a place to get away from it all, take a drive to the dam at Salt Fork Lake and find some peace.