On a rainy day at Grand Vue Park near Moundsville, WV, fog hung in the air making the valley below seem mystical. Through the mist you could see the bridge over the Ohio River. A celebration of our connection to the sacredness of earth was the focus of this Earth Healing and Water Blessing Day, but it seemed the rain had already performed the Water Blessing part.

Amanda DeShong and Mick Burk conducted the ceremony in a shelter at the park with help from many of their friends. This was a day of coming together for the healing of the earth and water, by participating in traditions of cultures from around the world.

Andy Frankel, a multicultural storyteller, captured the group’s attention as everyone gathered around to hear this master narrator tell tales of other cultures and traditions. He told the story of Chief Seattle, who predicted that man’s appetite would devour this land. By request, he told a second story of a Jewish man looking for justice. 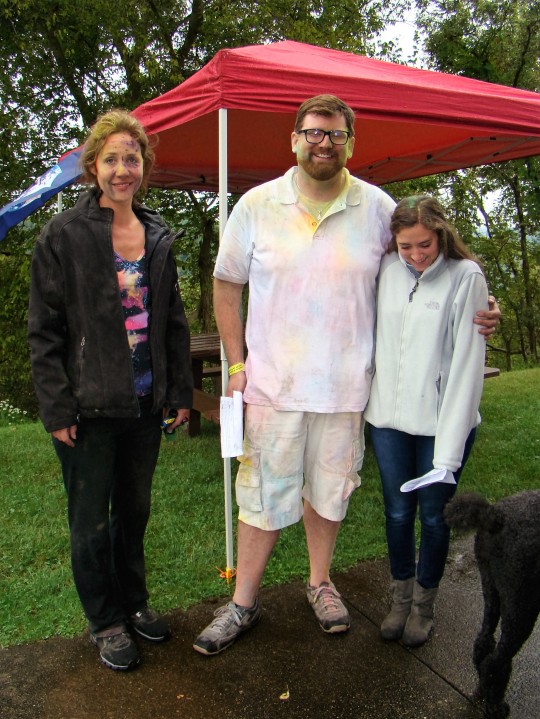 Some had just returned from the Festival of Colors at The Temple of Gold located nearby. The Festival of Colors is a family gathering of friendship, re-enacting a pastime of Lord Krishna with his devotees over five thousand years ago.  Bright colored powders are thrown on other participants until they appear to be in technicolor.

A water anointing was performed on the way to the Prayer Circle. Its intention was to generate energy to heal Mother Earth during this time of extreme turmoil and pollution. One young lady brought a bottle of water from Wheeling Creek to be blessed at the ceremony, thus beginning the purification process. She reported that when she poured the water into the creek that evening, the water in that area became clear enough to see the bottom of the stream.

The group then formed a circle around the Medicine Wheel to honor the Seven Directions Prayer. Everyone joined in the directional prayers, which were led by various people in attendance. 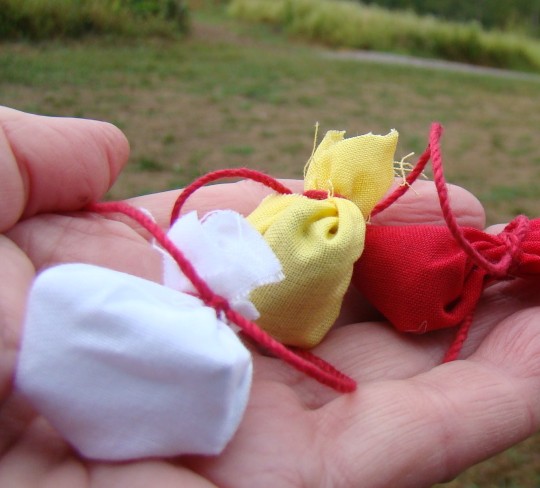 Prayer bundles were then made for a Despacho Fire Ceremony. A prayer request was written on a small piece of paper and placed inside a small piece of cloth with some special herbs. After praying over the prayer bundle, it was then tossed into the fire so prayers could ascend to the heavens.

Sunshine Jones led the group in a session of drumming to connect with Spirit. Everyone had the opportunity to use some kind of instrument for participation in the event.

One unusual instrument was the foot of a deer topped with a shaker ball, which made a delightful sound…and the foot was easy to grip.

Much dancing and singing took place around the fire as people got caught up in the spirit of the afternoon of earth healing. That healing must begin within ourselves, so we can then spread our energy to influence everything we touch.

This was a great day for meditation and connection with like-minded friends. There was a feeling of peace on the hilltop that is not often found in our busy lives today. Everyone left looking for things to appreciate in the world around them.