A “Pleasant Point” Along the Ohio River 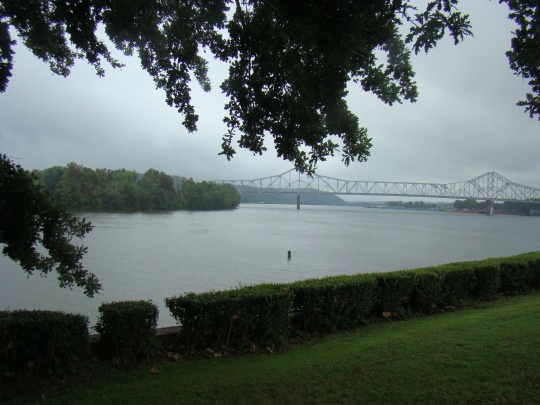 “A pleasant point” was the description given by surveyor, George Washington, when he arrived at the confluence of the Great Kanawha  and Ohio Rivers. Today the town that grew there is called Point Pleasant in West Virginia. The beautiful Riverfront Park is a pleasant surprise here and a wonderful place to take a leisurely stroll with the Ohio River on one side and large murals depicting the town’s history on the other.You can glimpse the Silver Memorial Bridge close to  the point where the Great Kanawha River joins the Ohio River near the end of the Riverwalk in the State Park, Tu-Endie-Wei, which adjoins.

The Ohio River peacefully flows carrying boats of various sizes for many purposes.  There are coal barges, speedboats, riverboats, and luckily this day the spectacular American Queen, the largest steamboat even built in the world. Built in 1995,  this beautiful riverboat is a  six-deck re-creation of a classic Mississippi Steamboat.  Its flat-bottomed style makes it possible to even continue if the waters become shallow.

Murals are painted on the floodwalls flanking the Ohio and Kanawha Rivers representing scenes from the Battle of Point Pleasant as well as other pieces of Point Pleasant history, including the Indian settlements of earlier days. Each large mural, measuring from 100-250 feet long, has one single monumental scene painted by artist Robert Dafford. His murals can be found in several cities along the Ohio River from here at Point Pleasant, West Virginia to Paducah, Kentucky.

One depicts the 19-year old George Washington surveying the wilderness where he met Benjamin Franklin and some land speculators, who were founders of the Great Ohio Company. This group intended to found a new colony called Vandalia that would have encompassed most of today’s West Virginia and Kentucky.  What a surprise to learn that on the eve of the American Revolution, there were thoughts of creating a fourteenth colony with Point Pleasant as its capital.

On the other side of the murals is the historic Lowe Hotel, the largest landmark in Point Pleasant. Built in 1901 of Cleveland Berea stone and red brick, this monument was originally called the Spencer Hotel in honor of J.S. Spencer, friend and financial backer of the Smith brothers who owned the hotel.  At that time, traffic on the Ohio River was heavy, so a place to spend the night became an important attraction at Point Pleasant.  Today that  hotel is said to be haunted by guests who decided not to check out, one of those being Captain Jim who is waiting for his steamboat.

Two unusual metal statues of Chief Cornstalk and Colonel Andrew Lewis caught my eye along the Riverwalk. These were the two combatants in what many say was the first battle of the Revolutionary War…the Battle of Point Pleasant. The Virginia Militia led by Andrew Lewis defeated Chief Cornstalk, the Shawnee leader, and his braves, thus preventing the Native Americans from forming an alliance with the British. This in turn had a major influence on the outcome of the War of Independence. Their statues are located in front of a mural depicting the Battle of Point Pleasant in 1774.

By late afternoon, the American Queen paddlewheels begin turning and the riverboat slowly, almost magically, floats away from the shore. Calliope music fills the air and seems to take one back in time to a happier, more peaceful way of life. This is a great spot to sit down in a swing and watch the river and your cares drift away.

The Riverwalk at Point Pleasant, West Virginia is located just a half block from Main Street and of course, along the Ohio River. Frequent festivals throughout the year are held here and it is often a stopping point for riverboats.

Mysterious Mothman Museum Keep Your Eyes on the Sky

“Something bad is going to happen. Don’t go back.” “Be careful girl, I’ll get you.” These were just a couple of the messages received by residents of Point Pleasant, West Virginia after the appearance of what locals call “The Mothman”.

First stop on your Mothman adventure in downtown Point Pleasant will probably be the statue of Mothman at the corner of Main and Fourth Streets. This stainless steel sculpture by artist Robert Roach was unveiled in 2003 in what is now called Mothman Park. Red eyes are one of the outstanding features of this life size creature and are set to glow at night.

Today a visit to Mothman Museum will review the story of this unexplained mystery through videos, recordings, newspaper clippings of Mothman sitings, photos of the Silver Bridge collapse, and props from the Mothman Prophecies movie.

In 1966-67, over a hundred appearances by Mothman in the surrounding area frightened residents to the point that they were afraid to go out at night.  A seven foot tall figure would first be seen appearing to have wings with feathers, which had a ten foot wingspan. As it got closer the glow of its fiery red eyes seemed to be one of its most frightening features. Those who saw it would have terrible headaches, dreams, and visions.

At nearly the same time, UFO’s were also seen in town. Law enforcement as well as local residents were searching for Mothman and the UFO’s at night with search lights, as though they were searching for Frankenstein. The UFO’s were said to be disc shaped objects in the night sky with red lights encircling them.

Another mystery was the arrival in town of Men in Black. Really!  These men dressed in black suits would threaten those who had seen Mothman to silence…or else.  One newspaper reporter said the Men in Black visited her or phoned her and told her not to publish any more stories about the Mothman or UFO’s. One curious thing about them was that they never blinked their eyes. The government denied any involvement. These same Men in Black were seen crawling around the bridge before its collapse. This same reporter had visions of many Christmas packages floating in the Ohio River, which actually happened at the time of the collapse of the Silver Bridge on December 15, 1967.

When the Silver Bridge collapsed, witnesses reported it came down like dominoes. A loud cracking sound was heard and in less than a minute, the entire bridge collapsed into the icy waters of the Ohio River. Forty-six people died when the bridge completely disappeared under the water.  Mothman had appeared 13 months prior to the collapse, which occurred at Pier 13. Several possible reasons were given for the disastrous bridge collapse: 1) structural failure, 2) a sonic boom, or 3) the Curse of Chief Cornstalk.

While structural failure seems the most likely, could a sonic like boom have been caused by the sinister Men in Black crawling over the bridge shortly before it collapsed, or by Mothman’s wings?  Or was Chief Cornstalks’s curse responsible? Chief Cornstalk worked hard to keep his people neutral and was a member at treaty councils. When Chief Cornstalk surrendered in 1774 at the Battle of Point Pleasant, he signed a peace treaty with the Virginia militia, but a couple years later Cornstalk and his son were executed by the British. At this time, Cornstalk is said to have placed a curse of death and destruction on the town of Point Pleasant, as recorded in part here:

“I came to the fort as your friend and you murdered me. You have murdered by my side, my young son…. For this, may the curse of the Great Spirit rest upon this land. May it be blighted by nature. May it even be blighted in its hopes. May the strength of its peoples be paralyzed by the stain of our blood.”

However, after careful review, it was found that a weak eyebar was the most probable cause of the collapse, perhaps stressed by the additional weight of all the rush hour holiday traffic.

Many feel that the Mothman was a Prophet of Doom, warning the people that a tragedy was going to happen, as there are no stories of him attempting to harm anyone.  Fascinating Mothman appearances don’t seem to be limited to this one spot as there have been sightings around the world from Cincinnati to Afghanistan before major tragedies, for example: the earthquake in Mexico City, and the Chernobyl nuclear power plant in Ukraine.

Before leaving town  If you walk up the street a half block to the Ohio River you can also see along the Riverwalk a stone set at the place of the original Silver Bridge, which is just up the river from today’s bridge crossing the Ohio River to the Gallipolis area. During this visit, the American Queen can be seen docked between the two points.

After the Silver Bridge collapsed, there were no further sightings of Mothman, the UFO’s or the Men in Black.  Just mere chance? You decide. Best to keep an open mind as someday it could happen to you.  What will you do if YOU see Mothman?

Mothman Museum, one of the sidewalk shops of the famous Lowe Hotel, is along the Ohio River in Point Pleasant, West Virginia.  Across the street from the Mothman Statue on Main Street, the museum is open every afternoon.