A roadside peek on a cloudy day

Every little corner of West Virginia seems to have a beautiful mountain view, and nobody does Autumn better than West Virginia. Lindy Point near Davis, West Virginia, provides a dynamic view in several directions.

Heading back a narrow curving road only wide enough for one vehicle, it seems obvious that this is not a heavily traveled area even for tourists. There are only four parking places at the entrance to Lindy Point so it would appear they don’t expect many visitors, but surprisingly several people were met on the trail.

Traveling down a long, secluded path, each step needs to be taken carefully. Many tree branches, briers, and rocks appear on the path, which is basically a black dirt trail, but rather level. There are interesting plants along the way as the trail leads through dense rhododendron bushes. While eyes were open for animals, especially bears, none were spotted.

At places the road was muddy from rains of the past few days, and the black dirt trail turned into a boggy black adventure. There were places where there was no way around due to the heavy brush, so the only way to proceed was to walk right over the murky black bog. This was accomplished by placing the foot flat on top of the mud, one step at a time, and you didn’t sink in…well, at least not too much. A walking stick on this trail was particularly useful and welcome. 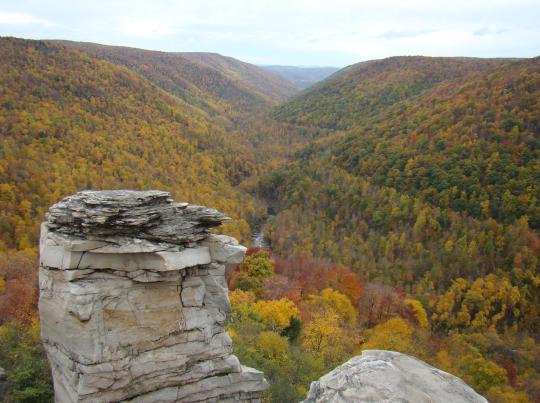 Looking over the edge at Lindy Point

Finally we reached the end of the trail to a magnificent view from the overlook. Here you can see 48 acres of the Blackwater Canyon, one of those picture postcard views in all directions, as the valley is ignited with the colors of Autumn leaves. The Blackwater River runs through the bottom, while at the top are unusual, free-standing, rock “chimneys”, which add to the spectacular view. These enormous rocks were pushed up during the formation of the mountains many years ago. 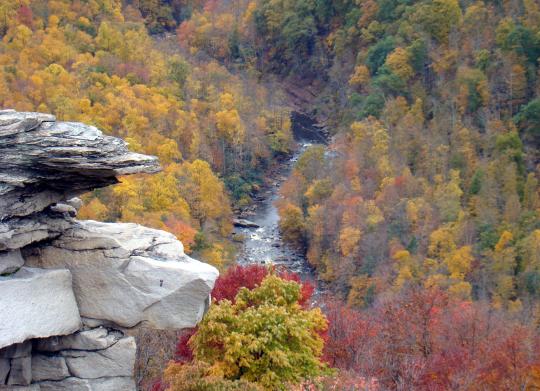 Zoomed View of the river below Lindy Point

A young man and his family appeared at the summit and told of his teenage adventures there for frequent picnics.  He remembered the time they were having a party out on the rocks before the platforms were built. One of his friends had too much to drink and fell to his death off the rock into the canyon below. The area was closed for a couple years and then the platform was put in place as a safety measure.

The walk back seemed much shorter and faster, but at the end it was necessary to clean the boggy mud off our shoes before moving on.

Autumn is a great time to catch the view from Lindy Point. Anytime is beautiful, but the colors of the leaves highlighted its beauty.

Directions to Blackwater State Park travel many scenic routes along the way. These are the clearest directions I have found: Take I-7o E to I-79 S. Stay on I-79 S to Morgantown, WV. At Morgantown, follow I-68 E to Rt. 42 S, Friendsville, MD. Follow to Rt. 219 S through Oakland, MD, to Thomas, WV. At Thomas, take Rt. 32 S to Davis, WV. See what I mean?