Cruisin’ Down the Muskingum River on a Sunny Afternoon

Camping, boating and fishing are popular along the beautiful Muskingum.

While the Muskingum River begins at Coshocton, between Zanesville and Marietta it holds many points of interest. This river is the only river navigable by larger boats within the state of Ohio. That’s all because of its system of eleven dams and locks, still in working order, that extends for 112 miles.

The Coal Run Ferry delivered a load of railroad crossties on horse-drawn wagons across the Muskingum before bridges were built.

The river received its name from the Native Americans, who called it Moos-kin-gung – meaning “Elk Eye River”. That name happened due to the large herds of elk that once roamed this valley. In those early days, the cargo on the river consisted of essentials such as salt, flour, pork and apples. A round trip took three to five weeks to go from Zanesville to Pittsburgh and back via the Muskingum and Ohio Rivers.

The steamer approaches Lock #3 at Lowell in the early 1900s.

When steamboats became popular, navigation was rough on the rugged Muskingum River so they designed a system of dams and locks to lift the boats when the elevation changed abruptly. After a boat is secured within the lock, the lock tender closes the gate and opens the valves required to raise or lower the pool level. When the water in the lock chamber has reached the required level, the lock tender opens the through gate just like they did in 1841.

Steamer Marietta got stuck on the dam when not using the locks.

Sometimes the boats would attempt to go over those rugged spots without using the locks. Once in a while they succeeded, but often they ended up stuck in the river.

The Lorena takes passengers on a pleasure trip down the Muskingum River.

This trip began with a stop at the Lorena Sternwheeler at Zane’s Landing Park in the city of Zanesville. While the original Lorena visited Zanesville in the late 1800s, the present one arrived in 1976 for Zane’s Trace Commemoration. A ride on the sternwheeler gives you a chance to feel the river, as the paddles create a merry sound. Memories of the 1800s ride along with the Lorena.

Lock #9 at Philo provides a great view of the dam and locks.

Soon Lock 9 at Philo appears with the original lock tender’s house.The falls at the lock sparkle in the sunshine as people stand in the shallow river to fish.

The Philo Ohio Power Plant was the first electric plant built along the Muskingum.

In 1923, Philo Ohio Power Company, one of the largest electric plants of that time, was located on an island in the river. 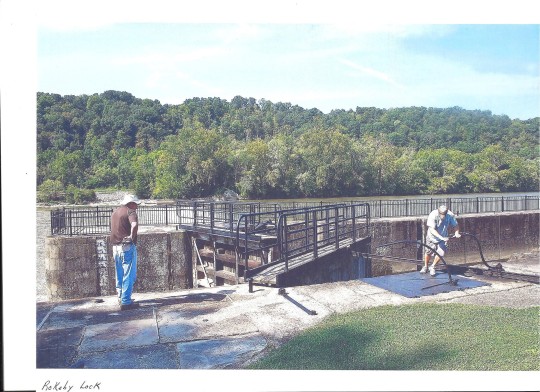 The lock tender hand operates the lock at Rokeby Lock #8.

Lock 8, Rokeby Lock at Eagleport, is a special stop along this system of locks, the only hand operated locks still being used in the United States today. In fact, it is believed there is only one other system like this in the world, and that is in China. It was near this lock that General John Hunt Morgan and several hundred cavalry forded the Muskingum River on his raid across Ohio.

Stockport Mill Inn would be a pleasant place to spend an evening.

Beside Lock 6 stands the beautiful Stockport Inn. Today’s Inn was built in 1906 by the Dover brothers; however, there were two mills previously at this site dating back to 1842. This mill was known for its refined flours: Gold Bond, Seal of Ohio, and Pride of the Valley. It’s a perfect place to spend a night as each room has a balcony that overlooks the river. On the weekends, enjoy a tasty meal at Restaurant on the Dam. 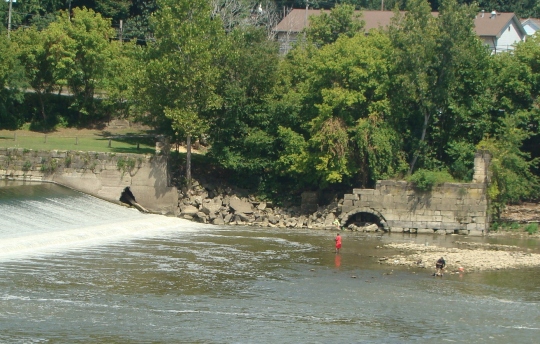 Fishermen wade into the river in hopes of a great catch.

During the drive down the river, it is lined with cabins and campers for those that enjoy being near the water. Most have boats at their docks and many slides end in the river. Frequently fishermen are either on the shore or wading nearby waiting for a nibble on their line, and perhaps fish to cook over a campfire in the evening 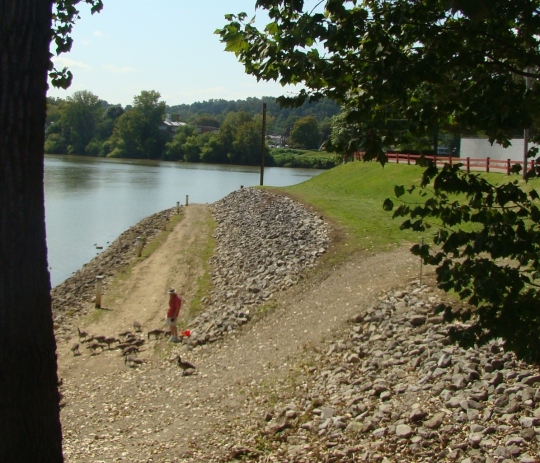 Imagine early travelers’ surprise upon seeing that the Muskingum River empties into the wide Ohio River at Marietta.

The trip ends at the first permanent settlement in the Northwest Territory – Marietta. Here the Muskingum River joins the Ohio River to flow eventually to the Gulf of Mexico.

At the confluence of the Ohio and Muskingum Rivers stands the Lafayette Hotel.

Some say this beautiful old Lafayette Hotel still holds spirits of many travelers from the past. One nighttime visitor is Mr. Hoag, former owner of the hotel, who appears in his brown derby hat. That’s something not seen by my eyes, but a story heard by my ears.

The locks are open weekends 9:30 – 6:00 from mid May until mid October. Please check their schedule and call ahead if you need to use the locks at another time so a lock tender can be available.

While in Marietta, you might want to cruise on the Valley Gem.

Be sure to take time to sit along the Ohio River and enjoy reminiscing about those long ago riverboats that went from Pittsburgh to Zanesville along this route. They carried both passengers and freight. Barges still carry their loads of coal and steel up and down the river, and people enjoy taking a ride in their pleasure boats as well.